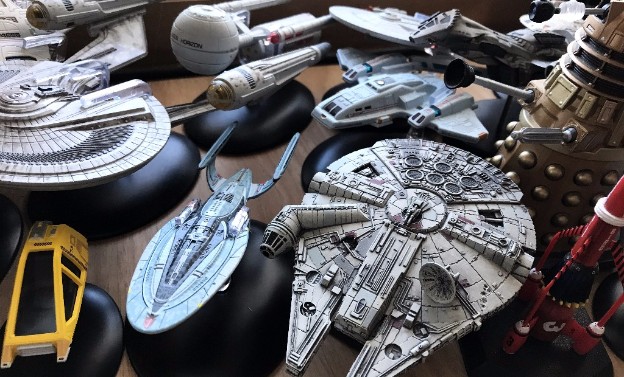 I’m sitting here on a very sunny Friday morning, about to leave my desk for a few days in Blackpool where my daughter will compete in the national ballroom dancing finals. It’s a rare occasion for me to be out of the office, away from my desk and my growing spaceship collection. But I’m taking the laptop with me and I’ll be working on the Arkship Saga in between the rumba and the waltz.

It’s been slow progress this week due to a lot of other things needing my attention. I’m about to write a huge space battle, so things should speed up this next week. Here’s a small taste from Chapter One:

“What did you see?” the Reader asked impatiently.
“An . . . arkship.”
“Which one?”
“It was . . . it was huge. Our ships don’t stand a chance.”
Reader Aronson grabbed him by the shoulders, forcing Owen to look at him. “Which arkship? Is it Draig? Was it the Fenrir?”
Owen nodded, unable to look him in the eyes.
The Reader gasped, then let go. He retreated until his back hit the wall, an ashen expression on his face.

Hope that doesn’t spoil it for you! Don’t forget, you can pre-buy Arkship Vengeance now, and you’ll get it at 75% of the launch price. Go on, what are you waiting for?